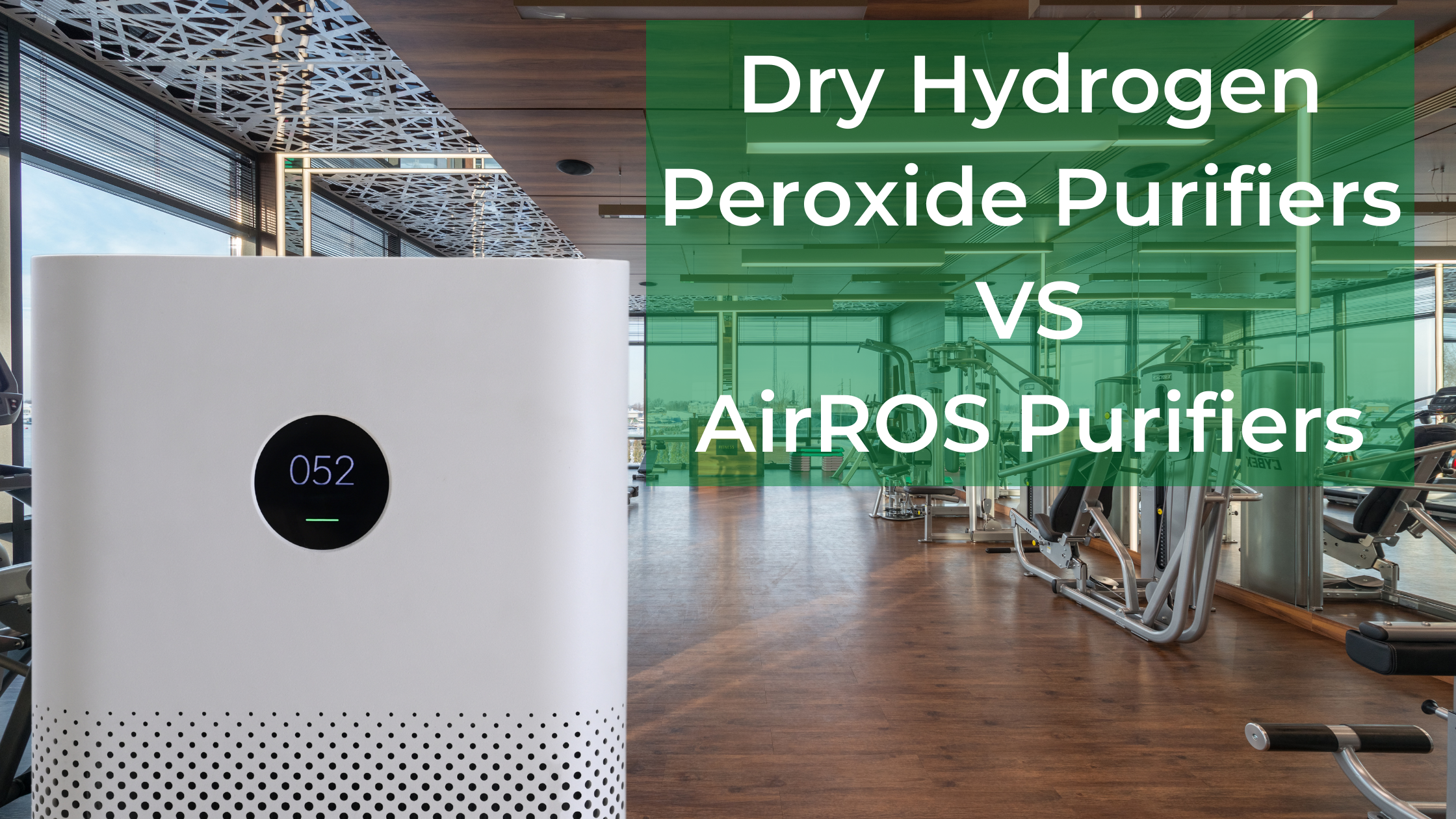 What is Dry Hydrogen Peroxide?

Dry hydrogen peroxide is a compound made up of one atom of oxygen and two hydrogen atoms. It is classified as an inorganic compound with 34.01 grams/molecule molecular weight.

There are a few reasons why you might choose to use a dry hydrogen peroxide purifier. One of the main benefits is breaking down a wide range of contaminants, including bacteria, viruses, and mold spores. It also produces oxygen, which can help to improve indoor air quality.

How Do AirROS commercial air and surface purification systems work?

AirROS purifiers utilize and create ROS (Reactive Oxygen Species). First, it kills pathogens and odor as it passes through the air purifier. In addition, it sanitizes the air that comes out of the purifier, enters the environment, and continues to sanitize all surfaces it contacts. Here is the 2 stage process:

These break down carbon-to-carbon bonds that sanitize the air and destroy all bacteria, molds, viruses, and other pathogens as they pass through the reaction chamber.

When it comes to providing surface treatment with Dry Hydrogen Peroxide purifiers, there is a limitation it can do when it comes to it. These Dry Hydrogen Peroxide purifiers technology can only provide short-distance surface treatment within the air purifier because of the short life of hydrogen peroxide. If you have a surface not close to the purifier, it will be untreated and left vulnerable to contamination.

AirROS commercial air and surface purifiers offer long-distance surface treatment because of the Trioxidane that forms from O3 and H2O2 combined, which means you can treat any surface, no matter how far away it is from the purifier. As a result, it provides an added layer of protection against surface contamination and eliminates odor effectively.

Why Choose an AirROS Commercial Air and Surface Purifier Over a Dry Hydrogen Peroxide Purifier?

AirROS commercial air and surface purifiers effectively eliminate contaminants in the air and on surfaces. They also produce Trioxidane, which helps sanitize the environment. In addition, AirROS units provide long-distance surface treatment, which Dry Hydrogen Peroxide purifiers cannot match. So if you are looking for an efficient and reliable way to purify your air and surfaces 24/7, AirROS is a clear choice. Order your unit today!

Menu
We use cookies on our website to give you the most relevant experience by remembering your preferences and repeat visits. By clicking “Accept”, you consent to the use of ALL the cookies.
Cookie settingsACCEPT
Manage consent

This website uses cookies to improve your experience while you navigate through the website. Out of these, the cookies that are categorized as necessary are stored on your browser as they are essential for the working of basic functionalities of the website. We also use third-party cookies that help us analyze and understand how you use this website. These cookies will be stored in your browser only with your consent. You also have the option to opt-out of these cookies. But opting out of some of these cookies may affect your browsing experience.
Necessary Always Enabled
Necessary cookies are absolutely essential for the website to function properly. These cookies ensure basic functionalities and security features of the website, anonymously.
Functional
Functional cookies help to perform certain functionalities like sharing the content of the website on social media platforms, collect feedbacks, and other third-party features.
Performance
Performance cookies are used to understand and analyze the key performance indexes of the website which helps in delivering a better user experience for the visitors.
Analytics
Analytical cookies are used to understand how visitors interact with the website. These cookies help provide information on metrics the number of visitors, bounce rate, traffic source, etc.
Advertisement
Advertisement cookies are used to provide visitors with relevant ads and marketing campaigns. These cookies track visitors across websites and collect information to provide customized ads.
Others
Other uncategorized cookies are those that are being analyzed and have not been classified into a category as yet.
SAVE & ACCEPT